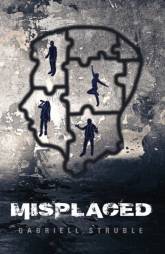 After years of struggling with mental illness, Liam finds himself in a group home for troubled young adults. He faces med carts, intrusive doctors, and worst of all: group therapy.

His situation is worsened by the fact that he sees all of his disorders personified by those he has lost. He sees his ADHD dancing around the room, hears his anxiety panicking in the corner, and fears that his intermittent explosive disorder will one day convince him to seriously hurt someone. Misplaced follows Liam’s recovery as he is forced to relive his past and prepare himself for a future in a society that makes him feel so out of place.

Click here to see all purchasing options for this book.

Gabriell Struble is a graduate student in the mental health counseling program at Alfred University. She graduated from Cazenovia College with a B.S. in psychology and minors in English and human services. She has been writing since she could hold a pencil, starting with movie scripts to perform in her aunt’s living room, before moving on to having her original play, Misplaced, produced at the Catherine Cummings Theatre in Cazenovia, and having her original novel of the same name published through BookLocker. When she is not studying or writing, she can be found hanging out with her cats and dogs, performing in musicals, or spending time with her beautiful wife, Taetum.